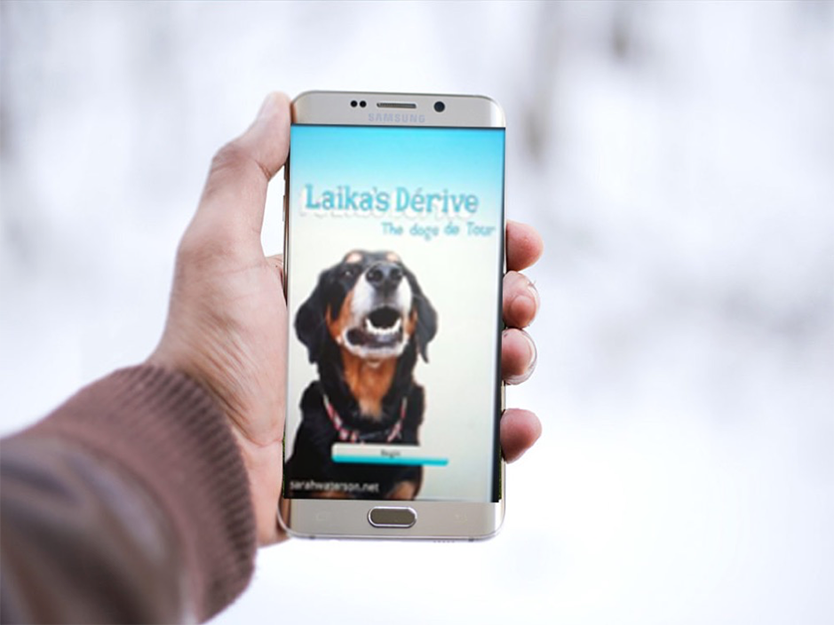 The focus for this iteration was community development, engagement and mapping. I aimed to use the work to provide a framework for recording relationships as a way of placemaking. I also wanted to subvert, or at least provide an alternative to the mainstream art institution’s regulation of cultural experiences.

For this iteration the project was opened to Sydney’s inner west dogs and their owners.

Included as part of the Performance Space’s Walk program, the project included the walk (dérive), and the Best in Show BBQ event. The dérive program was fully subscribed (it was booked out in 2 days). The online component had over 5,000 visitors, and the end of show event attracted full attendance

Participants booked a walk via a web form, and picked up a kit (mobile phone with the Laika’s Dérive app installed, a harness based on dog size and a GoPro camera with custom mount) and were briefed by Performance Space staff.

At the beginning of each walk, owners filled out the form on the app, and took a snap of themselves with their dog. They then attached the mobile phone to the collar mount[1], and the harness with the GoPro camera. The app form captured the owner and dog details at the start of the walk. The app used the phone’s GPS, and accelerometer to record data while the walk was in session. The GoPro camera recorded the photographs from an over the shoulder canine point of view.

At the return of the kit, the photographs and mobile phone data was uploaded to my server for backend processing.  Each batch was automatically named according to the dog name field data from the app. The sniff algorithm mapped sniff and dwell time data (adjusted to dog size) to the EXIF data of the GoPro photo streams. Then the photo journey (dog’s favourite location snaps) alongside dog and owner details from the app’s user form then populated the frontend of the Laika’s Dérive public website. Participants and the general audience could then view their page and view the photo graphs as a sequence, or individually. A Laika’s Derive Facebook page handled the announcements and served as a document of the social activity generated by the project.

At the culmination of the project a Best in Show BBQ was held, where dogs and their collaborators shared their stories, happy snaps and trails of discovery. This was well attended, with over 50 dogs and 100 people present. The event included a sausage sizzle (carnivore and vegan), a performance by Tess De Quincey and her giant poodles, and an awards ceremony. For the awards ceremony, the photographs were judged prior to the event by curators from The Australian Centre for photography (ACP), and prizes awarded for the best in show dog photographs. Categories included best overall dogographer, best abstract, best landscape and best magic realism. Certificates and dog prize packs (supplied through sponsorship from a local dog treat business) were awarded by the curators of ACP and Performance Space. Celebrant Victoria Spence was engaged as an event consultant and MC for the day.

For the performance component I commissioned bodyweather practitioner Tess DeQuincey, to develop a piece titled Dog-body. This was a collaboration with her three giant poodles, with a soundtrack that included field recordings of Australian dingos. The dog audience joined in at key ‘howling’ moments. De Quincy was chosen for this role as her practice involves inhabiting and dancing atmospheres, which was a good analogue to the dog walk experiences.

During this iteration over 80,000 photographs of inner city Sydney were taken by the dogs, and over 8 gigabytes of data generated. Approximately 1200 photographs were displayed on the website as the sniff/interest spots for the dogs participating.

[1] For this iteration it was found that the app accelerometer data from a mobile located within a pouch attached to the collar was sufficient to track head movement. This was calibrated to 5 dog size categories. Mapped to dwell time a sniff could be detected. The more complicated tilt device developed during the Blast Theory residency was not required.