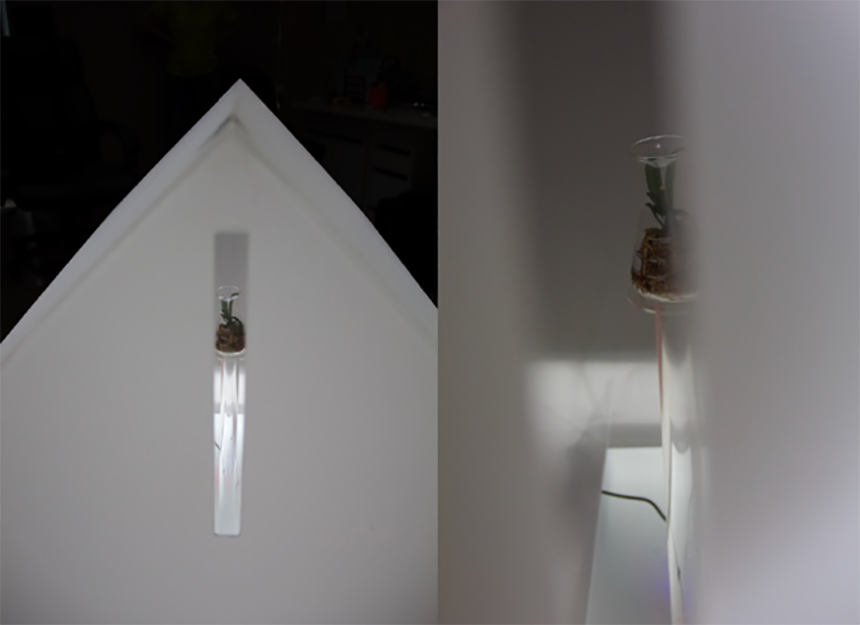 Hothouse is a reactive weather system designed to accept data via Bluetooth and generate weather based on that data within a house structure. In practical terms, it consists of a Bluetooth-enabled Arduino board with custom electronics that control mist (clouds), water (precipitation) and lighting effects. Hothouse produces the weather from Mt Kinabalu, Borneo to sustain a Paphiopedilum rothschildianum housed in a custom structure. The seedling was imported from a Taiwanese cloning lab. Live weather data is obtained via AccuWeather from a weather station at 1000m on Mt Kinabalu. Hothouse was exhibited at the Cementa 17 event in Kandos, NSW, Australia.

The Hothouse project was developed to further examine practice ecologies with a view to develop a system for data and display that repositions those practices. The practices had their roots in the British Victorian era, and included meteorology, architecture, and horticulture. Following Laika’s Dérive, I planned to develop a system for making sense of data, that re-territorialised data systems within the media artwork as the central tenet for meaning making within the work. As an orchid enthusiast, I was also concurrently developing amateur greenhouse automation for my orchid collection, which led to an examination of the practices which connected the automation to commercial systems.

Hothouse as a project also grew out of my mixed fascination, and perplexity in learning about Singapore’s Gardens by the Bay. Gardens by the Bay is, in essence, a very sophisticated biodome, hothousing botanic displays, and other structures such as the Supertree- solar collectors that provide a light show at night.

Their mission statement declares “We aim to be a model for sustainable development and conservation.” This type of systems thinking was highly problematic, as evident by the famous  Grasslands Experiment by George Van Dyne (1968-1976), where it didn’t matter how many inputs were identified, the system ultimately failed to sustain itself.